Posted by wcpoole at 8:57 PM No comments:

What is a Fiction Writer?

As a writer of both short stories and unfinished novels, I wonder what it is that defines me as someone who creates fiction. Of course, there is the obvious answer that I make up a story. Where a nonfiction writer bases narrative on events that actually happen, fiction writers take liberties. The characters, the events, even the setting can be drawn from the imagination.

In this process fiction is created. I would like to think that fiction is an imitation of life molded from the experiences in our lives in a mimetic fashion, but I feel there may be more to the craft than that. Consider the following quote from How Fiction Works by James Wood.

When Robert Browning describes the sound of a bird singing its song twice over, in order to "recapture / The first fine careless rapture," he is being a poet, trying to find the best poetic image; but when Chekhov, in his story "Peasants," says that a bird's cry sounded as if a cow had been locked up in a shed all night, he is being a fiction writer: he is thinking like one of his peasants.

Wood implies that it's necessary to inhabit the mind of the characters you create. For a fiction writer, it is not enough to document and comment on the world around you. You must live it. You must think through how a peasant, an expatriate, or a jazz musician would see and describe the world. In this sense, you acquire the diction and perspective of another and create a world that is not true. Some part of the fictive world has to resonate though. There must be something recognizable in fiction with which readers can relate. It is this aspect of recognition that draws readers to experience the life of another, whether the life actually occurred or not.

I think it is this ability to capture the mindset of characters that sets the fiction writer apart from the poet and nonfiction writer. If poetry is considered the purest, most condensed form of language, I would argue that fiction should be the considered the superlative telling of life, not of the author's life, or of those the author witnessed, but of those lives the author is capable of imagining.
Posted by wcpoole at 11:14 AM No comments:
Labels: craft

You are SO going to want to know about... 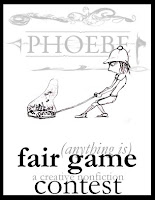