Our Stories, the online lit journal run by alum Alexis Santi, has received a bit of recognition from two organizations - 1) the folks at One Story, as part of their "Save The Short Story" project, wrote up a nice little feature on their blog, and 2) the storySouth Million Writers Award, the judges of which nominated "These People I Know" by Alex Stephens for the award. In May, Jason Sanford, publisher and editor of storySouth, will post the top ten finalists out of the many nominations and open the award up for the public to vote. Other nominations include stories from online journals such as failbetter.com, Blackbird, Agni, The Mississippi Review, and StoryQuarterly, so Our Stories is in good company. Good work to Alexis and his staff.
Posted by ryan call at 11:40 PM No comments:
Labels: Alumni, Journals

This just in from our department chair:
"I am pleased to let you know that Dave Eggers, editor of  Best American Nonrequired Reading, has selected Helon Habila's story "The Hotel Malogo," which was published in the Virginia Quarterly Review, for the 2008 edition."
Good work to Helon.
Posted by ryan call at 11:29 PM No comments:
Labels: Faculty, Publications

Congratulations to Allyson and Ryan! Allyson is a first-year student; she received her BA and MA in English from VA Tech, where she also won writing awards. And all of you blog fans should know Ryan; he is the co-founder of and the primary contributor to this blog. Ryan is graduating in May from the MFA program.

Winner: Ryan Call, An Embarrassing Knot I Could Not Undo

Posted by KVK at 9:04 PM No comments:
Labels: Awards

Virginia Tech and the GMU Alum

Today, the anniversary of the Virginia Tech shooting massacre, The Washington Post features an article from our very own GMU fiction alum Colleen Kearney Rich, who currently works as an editorial director at Mason's Creative Services department.
Posted by Priyanka at 10:17 AM No comments:

David Ohle, author of Motorman, after years of quiet, has begun publishing , first with The Age of Sinatra in 2004, and now a new book, called The Pisstown Chaos, forthcoming this June from Soft Skull Press. See his interview over at Bookslut for details.

I point this out because, if you have not read Motorman, you ought to check it out.

Tell me about your time with Burroughs in Kansas. Had working with him on his memoir influenced your fiction?

I met Burroughs when I moved to Lawrence in 1984 and hung out with him once or twice a week until his death. I cooked dinner for him on Thursday nights, took him to the methadone clinic in Kansas City on occasion (where he picked up a "six pack" for the week), took him fishing and target shooting (I fished, he shot). I also transcribed a few of his novels from manuscript to computer files (Western Lands, Queer, The Cat Inside). A rumor has persisted that I somehow transcribed his dreams, but it's not true. I'd like to say that his writing had no influence on mine, but that may not be true either. If any of his writing influenced me, it would have to be Queer and Junkie, the two works of his I most admire for their starkly simple, straightforward style. (I wrote a screenplay adaptation of Queer, which Steve Buscemi initially optioned, but it has never been made.) His fame as a writer aside (Bill never talked about that), he was a very smart guy, a razor-sharp wit, and funny as hell. We were friends. I wrote a more complete account of my times with Burroughs called Mutate or Die: With Burroughs in Kansas, published by The Beat Scene Press. I've also published (Soft Skull, 2006) a memoir of Burroughs' son, Billy, called Cursed from Birth.

The novel goes to crap...or does it?

So I open up the Washington Post this morning and see this article, Bethesda Start-Up Makes Writing a Little Less Lonely , about an online community that writes novels and posts them for users to contribute to/revise/comment on, etc. While I'm not really down with the whole self-publishing aspect of it, it's an interesting read.
Posted by Priyanka at 2:31 PM 1 comment:

The groves of academe: David Leavitt Interviewed at Court The Jesters

Leavitt, who wears many hats, one being the editor of Subtropics, is interviewed over at Court The Jesters; he talks about their fast turnaround time at Subtropics, their evaluation process, the MFA 'industry,' and the 'state' of 'fiction' 'today.'

Some excerpts for you:

DL: It's my fanatical neatness that drives us to respond quickly. I can't bear the sight of piled-up manuscripts. And yes, I see all the fiction, and Sidney Wade sees all the poetry.

In fiction we operate on the principle that most readers, when browsing through a magazine, will throw the magazine aside if the story they're looking at doesn't captivate their attention pretty fast. Accordingly Mark Mitchell and I sit down a couple of times a week with the fiction manuscripts and start reading them aloud to each other. Sometimes the MFAs participate as well. The rule is that the listener can and should shout "stop!" at the point at which s/he, if browsing, would throw the story aside. If we're able to get past the first page without throwing the story aside, we figure that the story deserves to be read. That story is then put aside and read by one of us all the way through. If the reader likes it, it's shared with others. Usually this process allows us to winnow out about 90% of the submissions. (This is a variant on the approach that my teacher of long ago, Gordon Lish, took in the workshop.)


DL: In all honesty, even though I teach in an MFA program, I have mixed feeling about the MFA industry (and it is becoming something of an industry). Here at UF, for instance, the quantity of applications that we receive increases substantially each year. This year we only accepted 6% of our applicants in fiction. More and more people seem to be writing.


Go read more of the interview, if you'd like.
Posted by ryan call at 12:23 PM No comments:
Labels: Friday 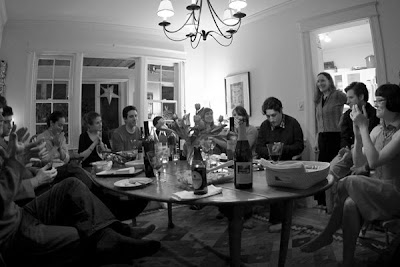 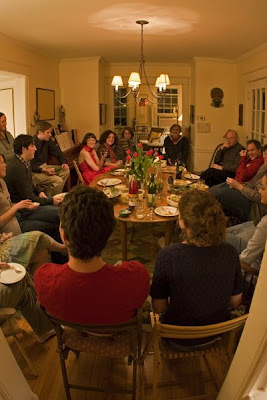 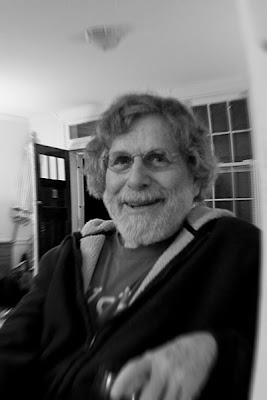 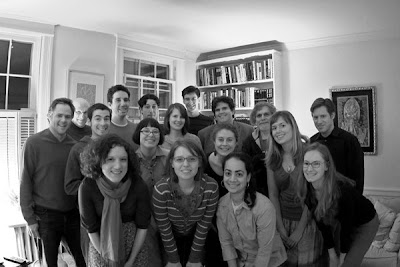 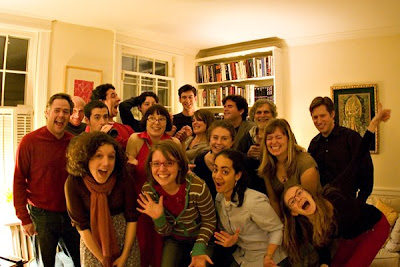 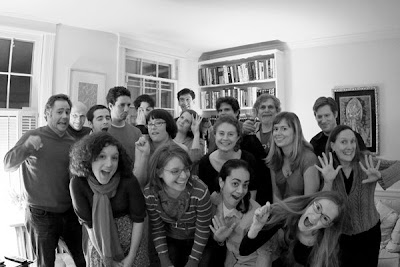 Posted by KVK at 12:39 AM 1 comment:
Labels: Faculty, Fiction Dinners

Who's coming? What to eat?